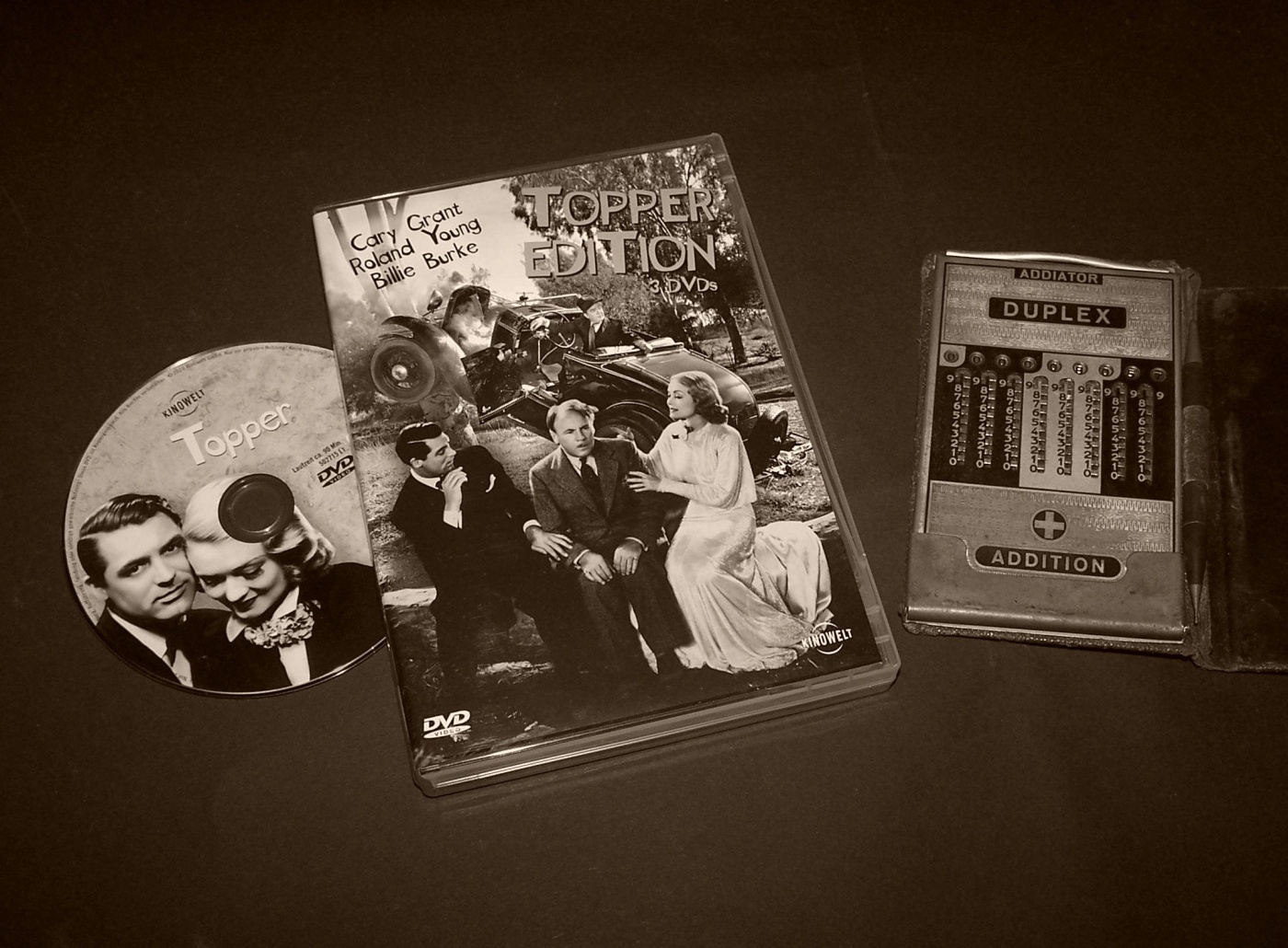 +++ Cosmo Topper is a quiet little man. He eats what and when his wife tells him to, and he doesn’t drink much or go out late at night. He is a very efficient bank manager, running the affairs of the National Securities Bank on behalf of its chief stockholder, George Kerby. George does not understand the business, nor does he show any interest in it. He also shows little respect for Topper’s good work, but rather ridicules him. George’s wife Marion is little better than him, but Topper is ready to overlook that because she is so elegant and charming.

George and Marion lead a carefree life. Being incredibly rich means they can do whatever they want. Mostly they drive around in their expensive sports car – rushing from party to party and from club to club. Their journeys through New York’s nightlife rarely end before dawn, and they seem to spend more time out partying than at their luxury New York penthouse or their house in Long Island. However, they soon pay the price for their fast-paced lifestyle and general carelessness: they die. Now, as ghosts with nothing better to do, they decide – for whatever reason – to meddle in Topper’s life and turn it upside down. Topper, they have decided, needs more fun and carelessness in his life. And while Topper is somewhat fed up with his wife’s strict regimen, the hoops our two ghosts make him jump through are definitely worse for him. Their help is not his to accept or reject, only for him to endure. +++

Topper is based on the novel of the same name by Thorne Smith, who had died way to young in 1934 so was no longer around when this film was made. I had never seen this film before, but I had heard a lot about it. And since I had a Topper box-set sitting on my shelf for quite some time now, I recently decided to finally watch this 1937 film, which went on to spawn a franchise.

During the mid-1930s, producer Hal Roach had begun to slowly phase out the short films he had previously been producing, and by 1937 he was determined to concentrate on feature length films. He was also trying to get away from simple comedy fare and produce more sophisticated comedies. Topper is regarded as the film that embodies these changes and that stands as the first in a line of more ambitious films for Roach.

Considering how well-known and well-liked this comedy is, I found it strangely disappointing. Sure, there is lots of humour here; scathing humour at times, thanks to Marion’s no-holds-barred commentary. But there is no story to be told. You have a premise, you have the gags and quips, and you have the special effects – effects which I assume were rather attractive and appealing to audiences back then. And it seems like the filmmakers were so pre-occupied with the effects that they forgot to develop their premise into a story. Maybe the fact that there were three people involved in the screenplay did not help either.

The cinematography (by Norbert Brodine) is good, and there are many double-exposure scenes making the ghosts “see-through”. Roy Seawright’s visual effects are mildly amusing, and the general sets and props look lavish. For the Kerbys’ sports car they had a special car made, with extra room for the camera and – I presume – for aiding the visual effects. This was certainly not a cheap production. Maybe this is also the reason why this car has much, much more screen-time than necessary: they probably wanted to get their money’s worth out of it.

The cast is doing a very good job. Cary Grant (George) is jovial and classy as ever, and Constance Bennett is very convincing as the party girl Marion, in a sort of flapper-plus-screwball-wife mix. Roland Young (St. Benny the Dip) is an excellent choice for Cosmo Topper and he received an Oscar nomination for this role. Billie Burke plays Cosmo’s naïve and conservative wife; and if you add the supporting performances by character actors Alan Mowbray and Eugene Pallette you have an excellent team to work with. There is also a cameo by Hedda Hopper, just at the point in her career when she was about to swap acting for becoming Hollywood’s most notorious and feared gossip columnist.

But while all these actors are great in portraying their characters, the story does not use these characters for anything. All is subordinated to the often slapsticky humour that is derived from the invisibility of the ghosts and the visual effects associated with them.

There is no character development in George and Marion, and very little in Cosmo Topper (who resented his wife’s strict regimen even before George and Marion started to meddle). The whole (rather uncomfortable) conclusion of the “plot” is only achieved through an unexplained change of mind on the side of Topper’s wife; and that change just hangs there, barely connected to anything else, because the wife is neither a particularly prominent character in the film, nor an active one.

All in all, despite its funny moments, its great cast and the good performances, this film is barely any better than Mr and Mrs Smith, and so I will rate it at 4.0 to 4.5 out of 10.