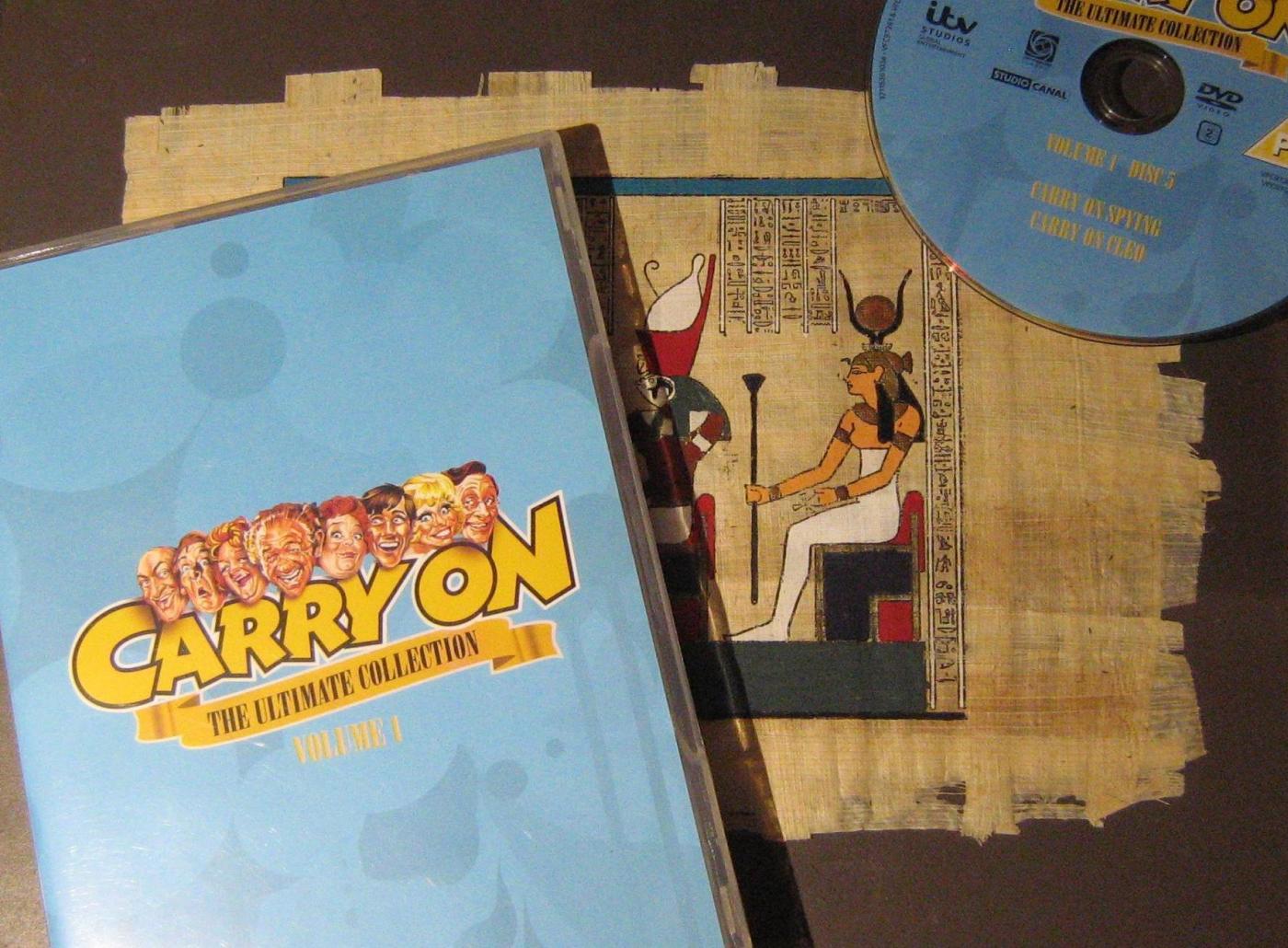 +++ Julius Caesar (Kenneth Williams) and his best friend Marc Antony (Sidney James) are in Britannia battling the natives, the bad weather, and the imminent threat of catching the next cold.
When news reaches them that the Senate and the people of Rome are growing restless, and that Brutus might exploit that situation, they hurry back home. But the biggest challenge is the deteriorating situation in Egypt, where Rome needs to pick a side in the impending struggle between Ptolemy and Cleopatra (Amanda Barrie). And so Caesar sends Marc Antony to Egypt. And through a number of mishaps, two enslaved Britons (Kenneth Connor and Jim Dale) get mixed up in this Egyptian expedition. +++

Apart from James, Williams, Connor, and Dale, there are two other major Carry On regulars in this cast: Joan Sims plays Caesar’s wife, and Charles Hawtree plays her father. There are not other roles big enough to mention, with the exception of Brutus (played by Brian Oulton) and the British slave Gloria (played by Julie Stevens). Jon Pertwee also appears in a very small role (his first of four Carry On appearances), and there is an uncredited role for Benedict Cumberbatch’s mother, Wanda Ventham.

Just like Carry On Jack, Carry On Cleo has a plot that is at the same time small and yet somewhat convoluted. Again it’s the characters that are the main focus here, no the story, so I haven’t much to say about the quality of Talbot Rothwell’s writing.
Rothwell is joined on the crew-side by the usual suspects of this era of Carry On films: Peter Rogers producing and Gerald Thomas directing, with Eric Rogers as composer and Alan Hume as DP.

Carry On Cleo rides on the coat-tails of the popularity of the genre of ancient epics, most notably Elizabeth Taylor’s Cleopatra which had been released 18 months prior. And in fact the Carry On team at Pinewood managed to reuse some of the sets from Joseph L. Mankiewicz’s epic, as well as some of Taylor’s costumes, shoes, jewellery, and head-pieces. Sidney James also got some more mileage out of Richard Burton’s Marc Antony robes.
There was nothing Twentieth Century Fox could have done about all of this, but they finally threatened to sue when the Carry On team tried to model a poster for their film on one from the Liz Taylor version.
Other legal drama included a law suit threatened by Marks&Spencer’s over the use of a gold-and-green colour scheme in connection with the pun on their name.

The use of the “real” sets, props, and costumes from a “serious” film contributes to the film’s lavishness and proves the commitment to emulate the genre properly. And naturally they chose to do this film in colour, making it the third Carry On film to get this honour. (From this point onward, all Carry On films would be shot in colour.) With all these factors combined, parts of Carry On Cleo look much better than you’d expect for a silly little comedy. Like Carry On Jack, Carry On Cleo uses its own lavishness in combination with tongue-in-cheek grandeur: Where Carry On Jack opens with oil paintings of naval battles, Carry On Cleo’s opening credits include the line: “From an original idea by William Shakespeare“.

Carry On Cleo seems one of the films in the franchise that fans love most. And Kenneth Williams as Caesar is something to behold. The running gag with him not being allowed to get his “friends, Romans, countrymen” line out is legendary. I also like how this film does have an actual plot running through the film (it is one of the least episodic ones so far), even though the plot is small and often nonsensical.

But, like with Carry On Jack, I find the genre they are spoofing here not all that interesting to begin with. And we today cannot even imagine what the omnipresence of Taylor’s Cleopatra and similar films was like, so the sting and/or relief of the parody is not felt in the way it was felt 58 years ago.

Carry On Cleo is a perfectly entertaining comedy, with some memorable scenes. I rate it at 5.5 out of 10.