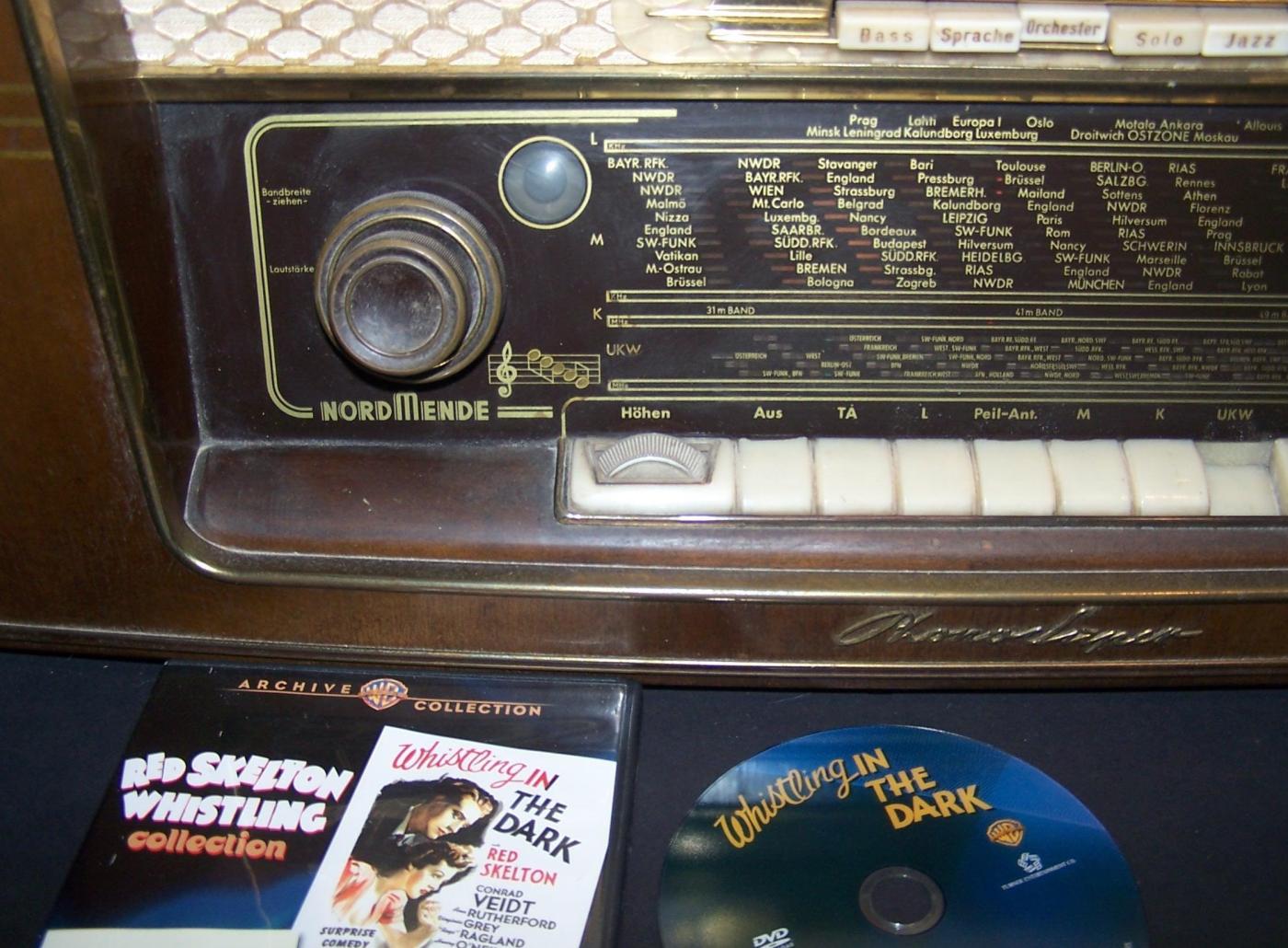 +++ Wally Benton (Red Skelton) has been writing (and starring in) a successful crime drama radio show for two years now. And he is looking to get married, even though things keep getting in the way. The latest obstacle is different though, as some shady people are trying to abuse his ability to think up successful criminal plots. +++

I had been meaning to revisit Red Skelton’s Whistling trilogy for a long time. I always found it enjoyable, but am not entirely happy with Skelton himself. Somehow I often have trouble with comedians who convulse their faces or their bodies a lot in the name of comedy, like Jim Carrey, for example. And Skelton falls a bit into that category as well for me.

It is not just Skeltons’s physical shtick that would ordinarily make him an odd choice to play a detective, but also his somewhat broad and unsophisticated type of humour. However, by making his character a writer/actor who simply plays a detective and then somehow gets sucked into real-life crime, the creators of this franchise tried to get around this slight mismatch.
And to Skelton’s credit it has to be said that he has a way of slipping stupid jokes and corny gags rather seamlessly into his dialogue, so that they often bother you not as much as if they had been delivered in the manner of an attention-seeking punch-line.

And since I am talking about the film’s humour, I should add that there is a surprising level of innuendo in this film. Not so much in terms of quantity, but in terms of scope. This is interesting for me, as this 1941 comedy is actually a remake of a 1933 film. Whistling in the Dark started life as a Broadway play (written by Laurence Gross and Edward Childs Carpenter) in 1932, and Ernest Truex, who played Wally on stage, also played him in the 1933 film adaptation. Usually you might expect that such a remake after only 8 years was caused by the original not being compliant to the Hays Code and thus not suitable for revival screenings (a fate that befell The Animal Kingdom, for example). And if you read David Inman’s side-by-side comparison of the two versions of Whistling in the Dark, you can see that there is at least one scene in the 1933 version that would have been a problem regarding the Code. But as I said, there is a surprising level or innuendo in the 1941 version as well. And as Inman’s article explains, there were outdated references to the prohibition and the stock market crash in the 1933 version; so that might have been an additional factor in the decision to remake this film.

I also was not aware of the fact that – as Inman points out – Wally was merely the writer of mystery novels in the original stage play and the 1933 film. The idea to make him a radio writer/actor only came with the 1941 remake. A highly appropriate change, considering the story’s ending – this way, the story feels more like it is coming full circle.
It is also lucky for me, because the way in which the 1941 version makes fun of contemporary radio shows is something I particularly enjoy.

It is in these areas that Whistling in the Dark holds the most interest for me. As I pointed out earlier, I am not a particular fan of Red Skelton’s style. But the fun the film pokes at radio, including the digs at the complex relationship between radio shows and their sponsors, is something I actually love. Within this pop-cultural context, the film also offers a brief social commentary on the relationship between radio and its audience, fiction and reality – with a direct reference to Orson Welles’s recent War of the Worlds broadcast.

Another contemporary phenomenon the film shines a spotlight on is the spiritualist hokum that was widespread in the late 19th century and in the early decades of the 20th. Although I would assume that at the time this film was released this phenomenon was well past its peak. Still, it was a popular trope for crime fiction, particularly television, way into the 1960s at least. Incidentally – as I learned from Inman – just like Benton’s radio career, the whole phoney-spiritualist-cult angle was also newly introduced for the 1941 version. The reason being that the prohibition-related crime angle of the 1933 version did no longer work in 1941.
Be that as it may, Whistling in the Dark takes its time in carefully developing the looks and rituals of this spiritualist cult, as well as the atmosphere that goes with it. And in that regard, the performance (and lines) of Conrad Veidt as the cult leader would also have been a nice fit in a horror film. I do not know this horror subgenre, so I have no idea if this 1941 film might also have been picking up on any cinematic tradition or trend here.

The character of the cult leader is interesting – and Veidt has a great, menacing screen-presence – but not enough is made of him or the cult. And all-in-all, the idea of the villains that sets the plot in motion is fairly stupid and risky, so it does not make much sense. A minor additional problem is that the leader has too many “individual” henchmen. Usually, you’d have one or two henchmen who are characters in their own right, and the rest are just interchangeable extras. In this film they tried to give five or six of them a personality of their own, and a bit of limelight. It is too much. Rags Ragland and Don Costello would have been more than sufficient to fill the screen with personality.

For Skelton, who was only 28 at the time of the film’s release, this is the comedy that pretty much launched his film career. The two female leads in this film are Ann Rutherford and Virginia Grey. They both are perfectly cast for their roles, but for two actresses who have to share almost every single scene together they are just a little bit too similar in type. Eve Arden plays Benton’s agent/manager and she does an excellent job in this somewhat smaller role.

As a major studio production Whistling in the Dark looks very good, and there is a lot of effort in terms of sets and wardrobe. The film has a bit of a slow start, as it has a lot of establishing to do (the cult, the criminal outfit, the radio show, the love triangle, etc.); and there is some dead air in the middle with an extended comedy set-piece that falls flat; but in general it has to be said that the film never grinds to a halt once it has started to pick up steam and it runs through to the finish line at a nice pace.
The finale must have been difficult to pull off, as much of it was low on physical action and relied on the actors taking the audience with them with dialogue only, but Skelton and his colleagues pulled it off nicely.

Although this is sometimes billed as a screwball comedy, I would not necessarily call it that. Apart from some farcical comedy and the fact that the rivalries between the two female leads have undertones of a class conflict, there are no discernible screwball elements in this film. There is no real male-female conflict and no fast-paced dialogue (outside of the radio performances). The film relies far more on physical comedy and “simple” humour.