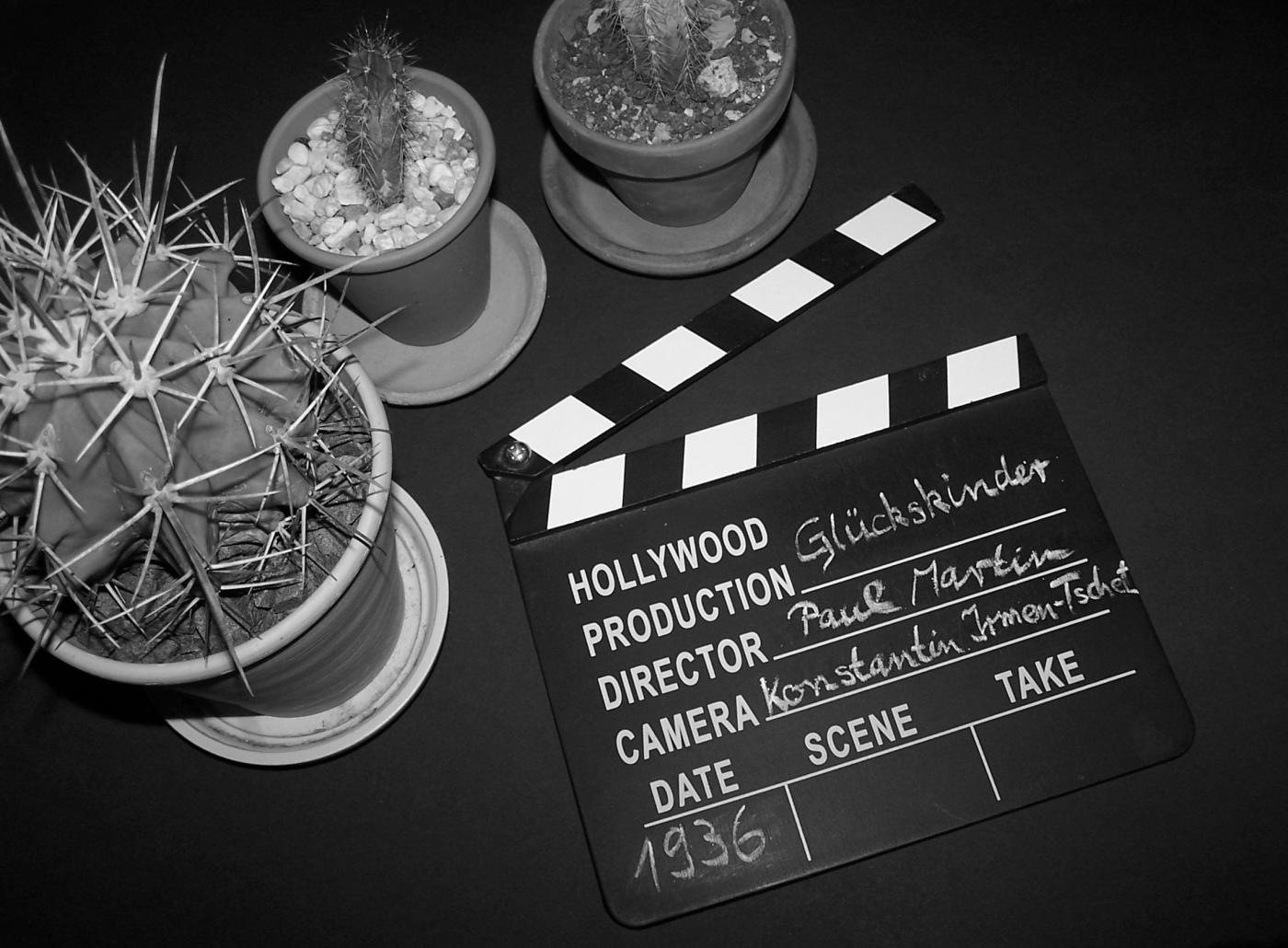 The English title of this German UFA comedy from 1936 is Lucky Kids, which is a more or less direct translation of the German title.

The reason I decided to watch this film was that it was billed in the TV listings as a “screwball” comedy, and I wanted to see what that might shape up to in terms of a German comedy. In fact, there are claims that this film not only tried to emulate Hollywood screwball comedies but was directly inspired by It Happened One Night.

+++ set-up and premise [spoilers for the first act]: No-one at the New York Morning Post envies Billie Hopkins. His job includes hanging around the municipal night court from 8 pm onwards hoping to find something interesting among all the fast-tracked, minor cases that come before the bench. But one day he gets so drunk that he is unable to do this court gig. Now all his colleagues are trying to cajole each other into taking on that thankless task, and they finally con a hapless freelance poet into doing it, assuring him that it is an honour and a challenge. This poet, Gilbert Taylor, who is interning at the paper, gets right to it, but he does not possess the professional lack of empathy of the rival newspaper men at the courthouse. When a meek young woman with a sad demeanour is accused of vagrancy, he steps in and vouches for her, claiming to be her fiancé. The judge, not knowing what to believe or not, marries the two strangers on the spot so that he can drop the case and move on. The courtroom is electrified and all the rival reporters are eagerly writing their pieces about the exploits of their new competitor. +++

The description above represents the first act, which lasts around 25 minutes of this 90-minute film. What follows is a standard RomCom scenario in which the newly-wed strangers have to find a way to deal with the situation (and with each other). But there are many twists and turns along the way, and this film throws a lot of ideas into the mix as there is a possible kidnap caper included as well.

As just indicated, this German comedy is supposed to take place in New York. The film opens a on a montage of shots of American skyscrapers, as well as newspaper headlines which – while written in German for the benefit of the audience – are entirely “American” in content. The headlines shown describe sporting events, scandals, organised crime, and daring-do. In combination with the accompanying score at that point all seems intended to tell the audiences that America is an energised, fast-paced place. Everything is bigger and faster, and when the montage shifts over into the first proper scene of the film, we are treated to a hectic newspaper office that feels rather too big as well.

I am not entirely sure why this story has to take place in the US. There is nothing particularly American about it. One explanation might be that the filmmakers felt that some of the more unlikely plot developments would be harder to sell with a German setting, and that by employing foreign characters and locations they could count on a bigger suspension of disbelief. But maybe the American setting was merely a tribute to the Screwball genre, and in that regard also chosen with an eye on export markets.
Talking of which: simultaneously to the German version UFA also shot a French version called Les gais lurons. UFA had started the practise of doing French versions of some of their films in 1930, when the first talkies were made, but Glückskinder was to be the last film they made in this manner.

The reason I mention the film’s American setting is that UFA seemed really determined to sell this US setting and they did a rather nice job in that regard. It seems that all of the locations are studio sets, even most of the outdoors street scenery, but the set designers made it all look at least halfway American. While the interior of Taylor’s flat looks a bit nondescript and could be German as well as American, other sets work far better. There is one scene in a tobacconist’s shop / drug store / diner in which they took some effort to cram in whatever US merchandise they could get their hands on, like English-language Coca Cola merch and a Wrigley’s vending machine. Other scenes set at a grocery store, in a subway carriage, and along a highway also show English signs and adverts, but some of them are far less elaborate. There are cultural references in the film to Clark Gable, Mickey Mouse, and the end of prohibition. UFA even found themselves an African youngster and added him as an extra as a black newspaper seller to enhance the “this-is-New-York” vibe.

The plot is convoluted and there is a lack of balance between the various parts of the film which means that the pacing is off. The scenes at the newspaper office and at the night court that make up the first act are the film’s highlight and nothing that comes after can really reach those heights again, neither in humour nor in sophistication. Much of the rest of the film consists of a hotchpotch of more or less funny ideas that do not always work, even though there are always individual moments or lines of dialogue that are rather good. A rather fast-paced third act with lots of “action” helps to tide things over.

The cast is one of the film’s strong suits. The leading couple is played by Lilian Harvey and Willy Fritsch, who were considered a power couple of German cinema in the 1930s. They are accompanied by Paul Kemp and Austrian actor Oskar Sima in the film’s two major supporting roles.
The newspaper editor is played by Otto Stoeckel, while the role of the judge is filled by veteran actor Paul Bildt. Bildt’s performance is crucial in making the courtroom scenes work as well as they do. But the inclusion of a random monkey in the background as well as the small “bar owner” role played by Kurt Seifert also add to the colourful nature of the night court.

Where does all of this leave us with regard to this film’s billing as a “German screwball comedy”? The subject matter certainly fits, as do the characters and the situations they find themselves in. It is the dialogue and wit where this film falls short. The dialogue is not fast-paced and witty. It is humorous, but often elaborate, so it becomes too cumbersome for the actors to actually delivery speedily; in fact, some lines they cannot even deliver naturally. This is not the fault of the actors, but of the writers (Curt Goetz and Robert A. Stemmle) and the director (Paul Martin, who is also co-credited as a writer). That said, the dialogue is not bad, it is just unwieldy at times.
Given how difficult it is to define “screwball”, and given that many Hollywood screwball comedies are not exactly shining examples of wit and nimbleness, there is no reason to deny Glückskinder the screwball label. As I said, subject matter, characters, and circumstances fit. But the question is always where you will draw the line: If Glückskinder is a screwball comedy, why not call Frech und Verliebt a screwball comedy as well?

As a comedy, I would rate this film at 6.0 to 6.5 out of 10. It is not brilliant, but it is amusing and you can see the effort that went into this film in virtually every scene.

Today, this film’s claim to fame lies not only in the Fritsch-Harvey-pairing but also in the fact that this is were the well-known German comic song “Ich wollt’ ich wär’ ein Huhn” originated. It is probably best known to international audiences today by its inclusion in Tarantino’s Inglorious Basterds.
Another song from the film, “Das Fräulein Niemand liebt den Herrn Sowieso”, also became a great hit in the 1930s. The melodies of both songs are also blended into the score underlying the opening credits.

Other interesting historical aspects include a small amount of double entendre as well as scenes involving a make-shift twin-bed. Both would probably no longer have been possibly in Hollywood in 1936 due to the stricter enforcement of the Hays Code. The question is, did the people at UFA know that, and did they believe that they might thus gain an advantage in third-country markets?

Glückskinder received a restoration treatment in 2012/2013 courtesy of the Friedrich Murnau Foundation and is, as far as I understand it, now theoretically available in 2K (which is probably not the level of quality I got out of my TV).